Almost a year since I started a post here!  That, I suppose, is what happens to hobbies -- some become permanent, others episodic interests at best.  The only stove "research" I have done over the last year has been small searches stimulated by old-stove posts in one or another of the Facebook groups I follow -- Antique Stove Collectors, Bottom Gate-Marked Cast Iron Cookware, and The Iron Works!  Collectors of Early Iron -- or by emails from individuals (archaeologists, collectors, museum curators) asking assistance with identification of old stoves or parts.

One of these write-ins came yesterday, from the owner of a nice "Old Philadelphia" pattern 9-plate stove with a bit of visible damage (the back of the top plate is chipped but probably repairable), made by a company I had never heard of under that exact name -- Pleis, Foering, and Thudium of 97 N. 2nd Street, Philadelphia. 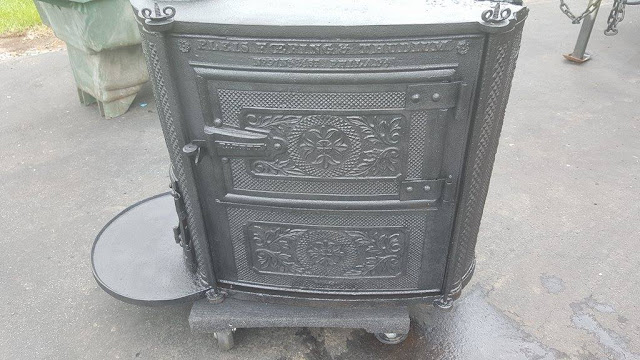 I knew of the firm under the second and third partners' names from a super 1846 engraving of a successor enterprise five doors down the street: 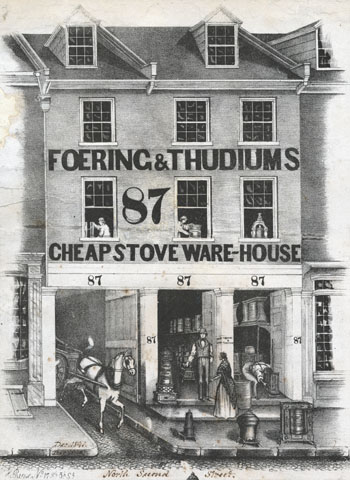 According to the catalogue information with that engraving, "Foering and Thudium, one of the city's first domestic stove manufacturers, started in business in 1828, and operated on North Second Street from 1845 until 1847." The picture showed a typical stove store on a narrow, deep city lot with a rear yard for unloading goods.  Stove mounters and finishers (white) are working at the upstairs windows, assembling the plates the firm has brought in from furnaces in the hinterland and foundries in the city; on the front steps, a partner or clerk is talking to a female customer, while a workman (black) is polishing a cooking stove much like the one above.

The Library Company's information whetted my appetite rather than satisfying it: a firm starting in 1828 cannot have been "one of the city's first"; if the firm was in the heart of the "stove district" on North Second Street between those dates, where was it, and its members, before, or after?  And what about Pleis?

The obvious thing to do was to check the city directories.  I had done a similar exercise for another firm, the Fougerays' Philadelphia Stove Manufactory, almost five years ago, and this had led me to work through the city directories from 1810-1845 at five-year intervals, charting the growth of the entire local industry. Pleis, Foering, and Thudium all figured in the resulting spreadsheet of firms and individuals, but not as a partnership.  So the next step was to do what I'd already done with the Fougerays -- go beyond the five-year intervals, and check every directory, to chart the men's emergence and disappearance, their changes of occupation, address, and business description.

The starting-point is the guide to city directories on the Greater Philadelphia GeoHistory Network's Resources page, which leads to a wonderful collection covering the entire period from 1785 to 1867.

The stove trade was already very well established, with a dozen stove stores or stove manufacturers, and one dedicated stove pattern-maker.  Foering's father, also a Frederick, was a Justice of the Peace and currier [dressing, finishing and colouring the tanned hide to make it strong, flexible and waterproof].  Other Foerings were in the related trades of saddle and harness-making.  Their family were prominent members of the Moravian community.

Frederick Foering & Co. had a drygoods store at 147 1/2 Arch St.  Young Frederick attained his majority in 1819; possibly this venture was his father's attempt to get him on his feet.  Neither Pleis nor Thudium is recorded.

Foering is now in partnership with Shober in the drygoods business, with a store at the Southwest corner of Second and Arch.  Jacob F. Pleis has a stove store at 173 North Second Street.

Frederick Foering's drygoods store is now on North Second, near Vine.  Jacob Pleis is listed as a stove manufacturer at 171 North Second.

Foering's drygoods store is at 164 North Second, and he is listed as Frederick Jr.; Pleis's stove manufactory has moved to 131 North Second.

Foering shows for the first time as a stove mr [maker or manufacturer], in business with Pleis at No. 97.  The only Thudium listed individually is a baker at 206 North Second, but there is a firm of stove finishers, Hess & Thudium, at 321 North Second.  John J. Hess has a stove store at 237 North Second.

Pleis, Foering & Thudium's partnership shows up for the first time, still at No. 97, and Foering and Pleis both get their own individual entries too as stove manufacturers, with Frederick's business address shown as 97 and 99 North Second.  The only Thudium with a separate listing is still John B. Thudium the baker, at the same address as in 1835, i.e. Pleis and Foering's junior partner C.A. does not seem to rate a business or residential entry in his own right.

Foering as in 1837; Pleis is listed simply as a manufacturer, and their business as Pleis, Foering, and Thudium, Stoves & Castings, 97-99 North Second.  Pleis is also a director of Philadelphia City Savings Institution, a manufacturers' bank with a capital of $200,000, whose address is 99 North Second.  Thudium still has no individual presence.

Foering as in 1835-1839, except that he is described as a stove mer. [chant]; firm details as in 1839.  There is no entry for Pleis, except as a bank director. Still no individual entry for Thudium.

1841 http://www.archive.org/stream/mcelroysphiladel1841amce#page/270/mode/2up/search/foering -- as 1840, except no entry for Pleis as a bank director either, perhaps because his bank had disappeared.

A Jacob T. (not F.) Pleis figures in respect of his store at 97 North Second; Pleis, Foering & Thudium, stoves and castings, is at "97 and 97," i.e. 99, the old bank address, has disappeared.  Foering's profession and addresses (business and domestic) as before, and no entry for Thudium.

No Jacob T. or F. Pleis, and P, F & T's address has been rationalized to just No. 97. Still no Thudium except John D., the baker.  Foering's details as before.

Foering as before; Jacob F. returns again, as a stove mr., at the firm's address; no Thudium except John D.

Foering is now in business, as Foering & Thudium, at 87 North Second, i.e. the address in the engraving; he has been joined in the business by A.R., his son Albert (they share the same home address), but his son's business is given as simply "stoves," whereas his ?father is still a "mer.[chant]".  Pleis as in 1842-1844, i.e. the partnership has ended and he is back in business at No. 97 in his own right; no Thudium at all.

Albert R. Foering reappears, as a clerk, with a home address of his own. Frederick, and the firm, as before.  Pleis as before.  There is a C.A. Thudium, a merchant, at 75 North Third, identified in the library record of the 1846 engraving as Foering's partner.

Albert R. is now a stove mr., Frederick's details as before, but the firm is now Foering & Son, stoves & castings.  Pleis as before, Thudium ditto.

Foerings are now Foering & Co., at 113 North Second, p. 237.  Arthur R. has moved out to the suburbs, and runs the firm by himself.  Frederick has moved house too, and retired (he is 67, and has no listed business or profession). Jacob F. Pleis's address is given as 123 North Second, p. 543, the premises of William H. Hyde & Son (John), Stove Dealers, p. 341, i.e. this is probably Jacob Jr., still in the same trade, but as an employee in another (successor?) business.

If another wet day comes, I might fill in the gaps.  But probably not.

What else can one learn about Foering online?

During the War of 1812, a Frederick Foering, holding the rank of Major in the Philadelphia Legion (a volunteer company), played an active role in meetings designed to commit the city wholeheartedly to the national cause [see also p. 564].  But as our Frederick was only born in 1798, this must have been his father, a Currier and Justice of the Peace.  He served as a Deputy Quarter-Master General.

In 1815-1817 his father was a Republican candidate for Township Inspector in the Northern Liberties district of the city.

His son Albert was born in 1823, i.e. after reaching his majority in 1819, and going into the drygoods business by 1822, Frederick Jr had also married.

The firm won an award (an honorable mention) for a stove that he had invented at the Franklin Institute's Twelfth Annual Exhibition of American Manufactures in 1842 -- "a salamander stove with a very convenient appendage for heating sad irons."  There are no patents recorded in his or Pleis's name, but another Foering (Benjamin F.), from a branch of the family that had become coal dealers, did patent a mechanically self-cleaning stove grate in 1856 (US Patent 14356).

By the mid-1840s he was a Life Member of Philadelphia's Apprentices Library Company, a benevolent institution supported by members of the mercantile elite.

There is a fire insurance survey of his and his son's 87 North Second Street store available online, but unfortunately for subscribers only.

Posted by Howell Harris at 3:19 AM No comments: