Read more »
Posted by Howell Harris at 2:44 PM No comments:

A lot of the material I've collected (and that underpins most of the Maps post) is organized in spreadsheet form -- or, if it's a flat-file database, easily could and should be -- so I have moved it into Google Sheets format and parked it here in public.  This also serves me as a useful index to my own materials, so it's not an entirely altruistic gesture.

Posted by Howell Harris at 2:29 PM No comments:

This is another of the things that used to be in my Stove History Stuff website. It's a chronologically-organized list of all of the many Google maps I've created to help me to see, make sense of, and communicate some of my research. I've often wished that I could do proper GIS work, but as I can't Google Maps allows me to produce a serviceable amateur version of something showing historical data in space as well as time.

Posted by Howell Harris at 2:10 PM No comments:

Stove Advertisements, Pamphlets, and Catalogues: A Guide to Online Resources

[This started life on my old Stove History Stuff website, but I'm copying it here because this is more visible and I'm more likely to update it here too.] 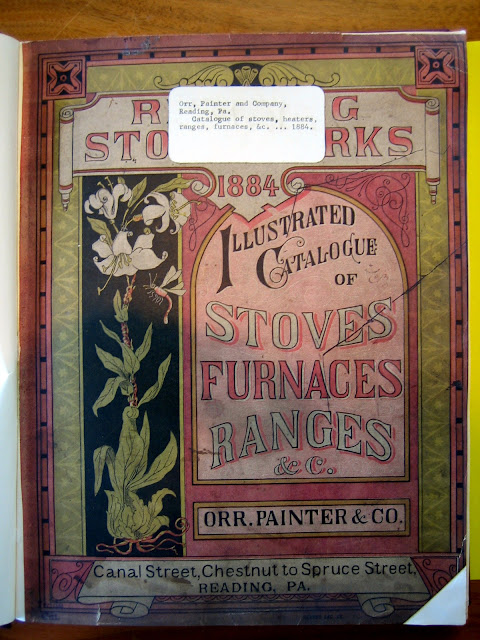 Stove merchants in the towns and cities along the north-east seaboard began to advertise the products they had for sale in local newspapers and other publications in the late 1810s and early 1820s.  Then in the 1830s and 1840s, as the industry grew and was reorganized by entrepreneurial firms that invented and designed, manufactured, and sold their own distinctive lines of stoves, makers began to produce a new kind of promotional literature -- illustrated pamphlets that explained their products' advantages over the competition and, sometimes, provided useful operating information for consumers new to stove use.

There does not appear to be any available online copy of what was probably the first of these pamphlets, Stanley & Co.'s Remarks and Directions for Using Stanley's Patented Cooking Stove (Baltimore, 1834 -- versions were also produced by the Stanley family's other sales outlets in New York and Philadelphia, and by their Cincinnati agent, Emor Whipple), or of Jordan L. Mott's Description and Design of Mott's Patented Articles, Secured by 27 Patents (New York, 1841), another of the oldest survivors.  However, I have made up for this deficiency by posting page images of this publication on Flickr (text begins here, and click right).

But from then on, things get a lot better, and from the early 1850s through the 1940s there is a good, quite representative collection of the publications that developed from the early pamphlets: illustrated catalogues.  These became the principal medium for informing retail merchants, and later consumers too, about the wide variety of cooking and heating appliances that the typical stove manufacturer offered.  There were probably more than a hundred new catalogues produced every year during the industry's heyday from the 1860s until the First World War. Thousands survive in private collections, and hundreds in research libraries around the country -- Lawrence B. Romaine's classic A Guide to American Trade Catalogs 1744-1900 (New York, 1960), Chapter 54, pp. 355-66, includes several hundred entries, and major research collections (notably the National Museum of American History's, the American Antiquarian Society's, the Hagley Museum and Library's, and the Winterthur Museum's) have grown apace since then.  For the center of the U.S. stove industry from the 1830s to the 1880s -- the New York Capital District -- the best holdings, understandably, are those in the Rensselaer County Historical Society, Albany Institute of Art, and New York State Library.

In the following list, there is an over-representation of Canadian firms after the mid-1880s, because Canadian research libraries have cooperated more with the Internet Archive in supplying material than any of the major US repositories.  But this does not really matter, given that most of them were simply copying or licensing the products and even the brand names of major U.S. firms, so they provide almost equally good evidence of the industry's overall development.

Prehistory: Before the Stove Industry (and the Catalogue)

Production of pamphlets, generally describing individual products or small, related groups of products, and then catalogues was probably a response to changes in the structure of the industry and its markets in and after the 1840s: the development of what were, for the time, relatively large, integrated firms controlling every stage of their product's manufacture, from design and manufacturing through wholesale (and some retail) distribution; a concomitant growth in the scale of production and the size of firms' product lines; increased competition between them, most of it non-price, i.e. based on patent-protected features and designs, all of which needed to be presented and explained to retail merchants and consumers; and, crucially, a change in the relationship and means of communication between manufacturers and their immediate customers.  Up until the mid-1840s manufacturers expected local merchants -- wholesalers, jobbers, and individual retailers -- to make personal visits to their "warerooms" at their factories or in the downtown stove districts of major cities (Philadelphia, New York, and Boston all had identifiable stove trade clusters by the 1820s).  Products could be displayed and demonstrated, and bargains struck.  What happened in the 1840s, partly because of an increase in the geographical scale of the market (Albany and Troy producers, for example, were selling stoves in San Francisco from almost the start of the Gold Rush), was that direct, personal connections between manufacturers and retailers, except as mediated through the postal service, became increasingly impossible.  What supplemented it or took its place was the hiring of traveling salesmen.  Stove salesmen could not carry samples on their selling trips of hundreds or even thousands of miles across the American interior, even after the spread of the railroad network.  What they could carry, though, was catalogues, whose primary intended readership was the retail businessmen on whom consumer sales depended.  Stove makers also began to use catalogues and other print and non-print advertising and marketing materials to support their retail customers' local sales efforts.  For all of this, see my “Inventing the U.S. Stove Industry, c. 1815-1875: Making and Selling the First Universal Consumer Durable,” Business History Review 82:4 (Winter 2008): 701-733 [Winner, Henrietta M. Larson Article Award, 2008], free version here.

Posted by Howell Harris at 7:41 AM No comments: