The Library of Congress has some nice colored lithographs of kitchen stoves -- somewhat different from the normal monochrome engravings used in most advertising copy.

This is wonderful, and crammed full of symbols.  What's the key fact about Emancipation? The ability to establish a (more) stable family unit and an independent household.  So what's at the center of the image?  The black family gathered around its cooking stove, in the room that serves them as kitchen and living-room, which is at least realistic.  There are other symbols of middle-class comfort -- the paterfamilias's padded chair, the drapes, the picture on the wall, and the clothing.  This is by the great Thomas Nast, then just 25, whose later representations of African Americans were often much less sympathetic.  The LC catalog entry provides a complete deconstruction of the image and its layers of meaning.  [For a later, perhaps more realistic, and certainly more negative depiction of the African American family and its kitchen stove, see the end of this post.]

This is a nice genre picture, but for my purposes its key feature is that the cooking stove is part of the family's portable possessions.  This is what helped make the classic four- or even six-hole stove into the "first universal consumer durable," as I have described it elsewhere -- its relatively light weight, achieved by steady improvement in the art of iron casting, turned it into something that wasn't just affordable, it could also move with families, whether from house to house within a town or city, or even on the overland trail across the continent.  The combination of light weight and durability, of course, also made possible the extension of the market area for stoves, from the seaboard towns and cities (the limit in the 1810s-1820s) into the interior, along the Erie Canal corridor, across the Great Lakes and the navigable rivers feeding them, and up (and down) the Ohio-Missouri-Mississippi river system.

[A rather different picture of a movable stove: from a New York play bill, 1898 -- not knowing the play, I have no idea what this poster illustrates, but it's a nice image in its own right.  No one in their right mind would have attempted to move a stove with a fire in it, of course --
http://www.loc.gov/pictures/item/var1994001029/PP/; see also the end of the post.] 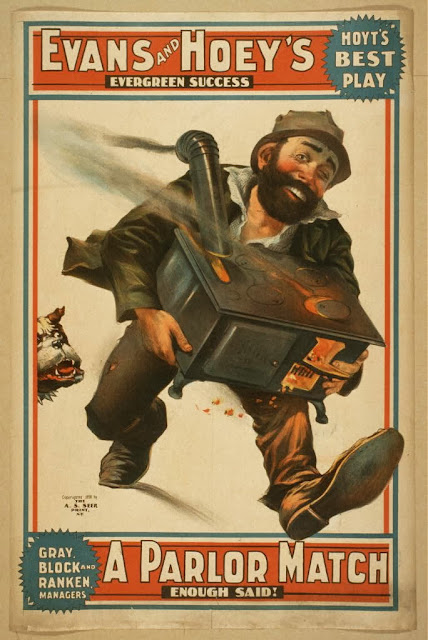 A somewhat idealized picture of the middle-class, probably urban kitchen, of the 1870s.  At its heart is what was called, for obvious reasons, a brick-set range, i.e. a built-in appliance, certainly not a portable stove like the one suiting smaller, poorer families illustrated in the earlier picture.  Brick-set ranges hand been on sale for at least half a century by the time this image was produced.  This one is in a fashionable Gothic design, and has a "water back," meaning that this lucky household enjoyed constant and effectively unlimited hot water from the copper cylinder alongside the fire (note that the sink has two faucets).  The range has its full kit of tools and equipment -- a dustpan and brush, poker, scraper, and lid-lifter to the left of the fire, with a couple of heavy boiler-hole covers on hearth tiles as an even heavier kettle and pan are sitting with their bottoms over the coals (i.e. projecting through the top plate of the range into the fire space).  The flat-bottom pan in the middle is probably sitting on the top plate.  To the right of the fire is the scuttle full of anthracite.  Running a range like this would have been hot, arduous labor, but in Prang's picture all we see is light, airiness, cleanliness, and order.  From the clock on the wall, it seems that lunch is being prepared.

This is a bit more realistic about range cookery.  It is hard to tell from the Prang's picture, but my guess is that it represents a middle-class housewife doing her own work.  Puck's cartoon  illustrates one of the great 19th-century American middle-class obsessions, i.e. how to get, manage, cope with, and hold onto servants.  Complaints about the inability or unwillingness of cooks to operate stoves and ranges efficiently or at all are everywhere in domestic advice manuals: the efficient kitchen that the middle-class housewife could manage by herself was one proposed answer to the servant problem.

And that was one of the lessons and purposes of Catherine E. Beecher and Harriet Beecher Stowe's classic The American Woman's Home: Or, Principles of Domestic Science; Being a Guide to the Formation and Maintenance of Economical, Healthful, Beautiful, and Christian Homes (New York: J.B. Ford & Co., 1869) and Principles of Domestic Science as Applied to the Duties and Pleasures of Home: A Text-Book for the Use of Young Ladies in Schools, Seminaries, and Colleges (New York: J.B. Ford & Co., 1870) -- essentially the same text.  Beecher and Beecher Stowe tried to cope with the necessity of having and using a stove, but also its perceived ugliness and the undeniable heat it produced, by shutting it away in a room of its own, allowing the rest of the housewife's kitchen tasks to go on in a more salubrious environment.  There is little evidence that anybody followed this part of their advice: a closed-off stove room would have been intolerably hot, and for ease of use the sliding doors to the rest of the kitchen would have had to be open anyway.

A more practical way of combining the economy and convenience of using a stove with the desire for a cooler kitchen was simply to use what they recommended as the best equipment on the market, designed for fuel efficiency and insulated (with the tin covers on the top, and "Non-Conducting Bottom") to minimize transmission of unwanted heat into the kitchen.  This was the celebrated P.P. Stewart Stove, manufactured by the Fuller & Warren Company of Troy, New York, for which Beecher and Beecher Stowe provided pages of publicity: 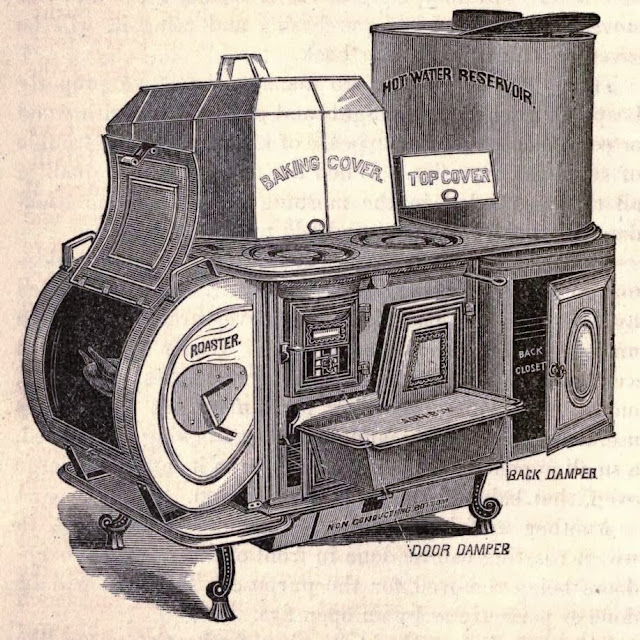 Postscripts (both from the LCP collection):

A. In Mosler's "Just Moved," the jovial paterfamilias hasn't actually erected the stove yet.  "Putting up" the stove, or taking it down again to move it, was definitely part of the man's role, and a regular seasonal duty, whether to move the stove out of the kitchen to a screen porch for summer cooking, or just for cleaning the flues.  The job was generally disliked because it was dirty and heavy, and turned into a staple of humour, as in these stereotype images from 1901: 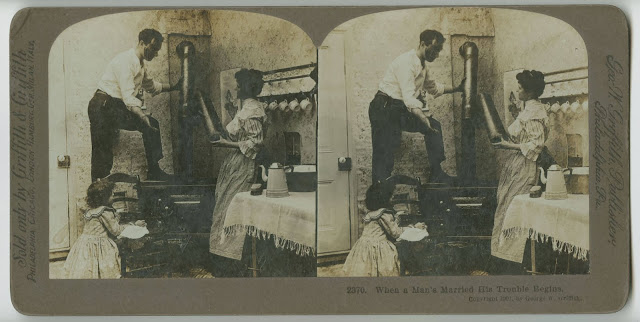 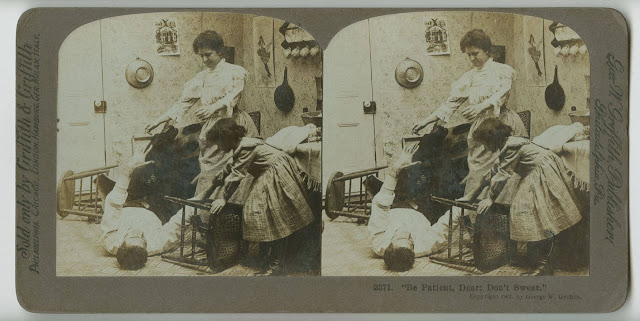 B.  Thomas Nast's "Emancipation" shows a comfortable, respectable, one might almost say "middle-class" African American family around its stove.  Thirty years later, and in the Border South, Knaffl & Bro. of Knoxville were perhaps more realistic, as well as mocking, in their depiction of African American urban poverty -- a few sticks of furniture, a rackety, unblacked old wood stove, and a crazy stovepipe.  These markers all said "hick," and probably something worse. 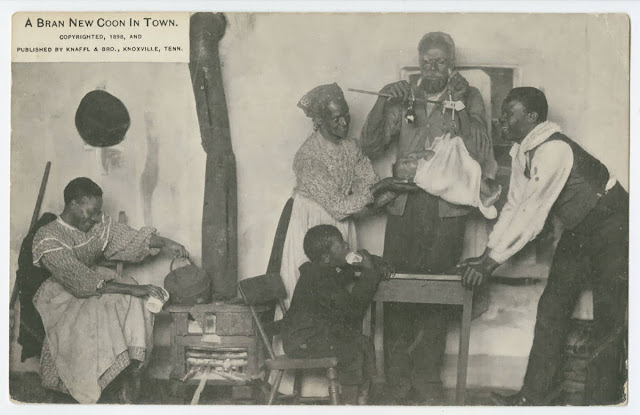 C. Finally, from Lewis Hine, one of the greatest American photographers of the early 1900s, a picture of worse poverty, but this time with complete respect: 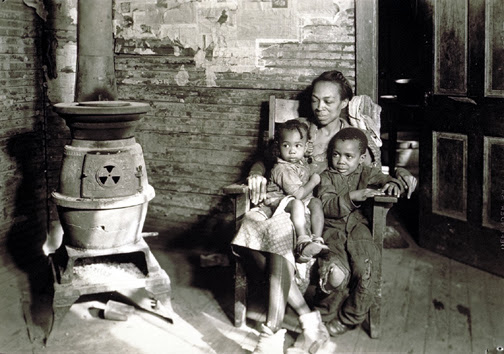 Posted by Howell Harris at 7:22 AM