[This is just a draft -- bringing together stuff from Ch. 1 of the book ms. with some links and pictures.]

"Caboose" is a word of uncertain meaning and spelling, probably derived from the Dutch kabuis, kombuis, or kombus and first appearing in (American?) English in 1732.  It referred both to the deckhouse on a small sailing ship in which the galley stove was placed, and to the stove itself, which -- on a larger, particularly a naval, vessel -- might be below decks.  Ships required fire-proof and fuel-efficient cooking appliances to meet the needs of tens and sometimes hundreds of sailors and passengers, so that there were a few makers and a specialized market for iron stoves in the East Coast's seaports even before the emergence of products designed for the household.  John Youle, a New York City iron founder, took out the first recorded American patent for a ship's stove (“Construction of a Cabouse,” 96X) in 1795, and leased a blast furnace in New Jersey to provide some of his raw material. William Ashridge took out a patent for an "Improvement in the Construction of Iron Cabooses" (No. 468) in 1803.  The Ashridge brothers (E.G. & W.) had been in business for several years by then, with premises on the Philadelphia waterfront by 1799, before the city had any recorded household stove makers -- see Abraham Ritter, Philadelphia and Her Merchants: As Constituted Fifty @ Seventy Years Ago (Philadelphia: Author, 1860), p. 35; Stafford's Philadelphia Directory for 1799.

By the early 1800s, American inventors had developed quite sophisticated cabooses that could also produce “a considerable supply of fresh water from salt, without much addition of fuel, enlargement of space, or of original cost” (review of Edward Cutbush, Observations on the Means of Preserving the Health of Soldiers and Sailors [Philadelphia: Dobson, 1808], in Samuel L. Mitchill and Edward Miller, eds., Medical Repository for February, March, and April 1809 [New-York: Collins & Perkins, 1809], Vol. 12, No. 4, pp. 374-8 at 376-7). Simeon Rouse of New York took out a patent (No. 416) in 1803 for an "Improvement in the Caboose of a Vessel for Distilling Fresh from Salt Water," and New York merchant John Lamb's “hearth or camboose” was actually in use from 1803.  It is described in “Specification of the Patent ... for certain Improvements in and upon a Machine for extracting Fresh Water from the Salt Water of the Ocean, (by Distillation,) and other Purposes, at Sea and elsewhere. Dated July 25, 1806,” The Repertory of Arts, Manufactures, and Agriculture [London] Vol. 11 (2nd Series), No. 66 (Nov. 1807): 407-11; a version of it was eventually patented by him in the United States as a “Fire-Hearth for Vessels,” 3184X, in 1820.

George Youle, a New York “plumber” manufacturing everything from lead water pipe to lead shot, who was probably John's younger brother, was the most active caboose inventor.  His own related patents included “Cabouse,” 675X, and “Caboose Stove Apparatus for Cooking and Distilling,” 690X (both 1806), “Caboose Cooking Stove,” 742X (1807), “Caboose,” 1112X (1809), “Moveable Kitchen,” 2160X (1814), and “Fire-Hearth Range or Galley,” 3087X (1819). It is possible that (a) George Youle was plagiarizing Lamb's idea, or vice versa, or that (b) they were partners, with Lamb securing their intellectual property rights by a British patent in the largest likely market for ships' equipment. Youle's profession and address (Water Street, on the Lower East Side) are from David Longworth, Longworth's American Almanac, New-York Register, and City Directory for the Thirty-third Year of American Independence (New-York: Author, 1808), p. 346; his store was just around the corner from the city's only other  recorded stove maker, Joseph Poudrell.

For the history of American ships' galleys and their stoves, see Frederick W. Wallace, Around the Galley Stove: A Dissertation upon Stoves Galleys Cooks Ships and Sailors in General (Stamford, CT: Stamford Foundry Co., 1911).

For surviving caboose patents, see:
What these designs have in common is their heavy construction, often of riveted wrought iron plates as well as or instead of more fragile castings, their large size, and the means provided (e.g. guard rails on the cooking-top, securing points for ropes etc.) for attempting to stop cooking pots and even the stove itself from sliding around in a storm.  Wikipedia has a good image of a mature late 19th century model from Plymouth, Massachusetts, which is quite stove-like: 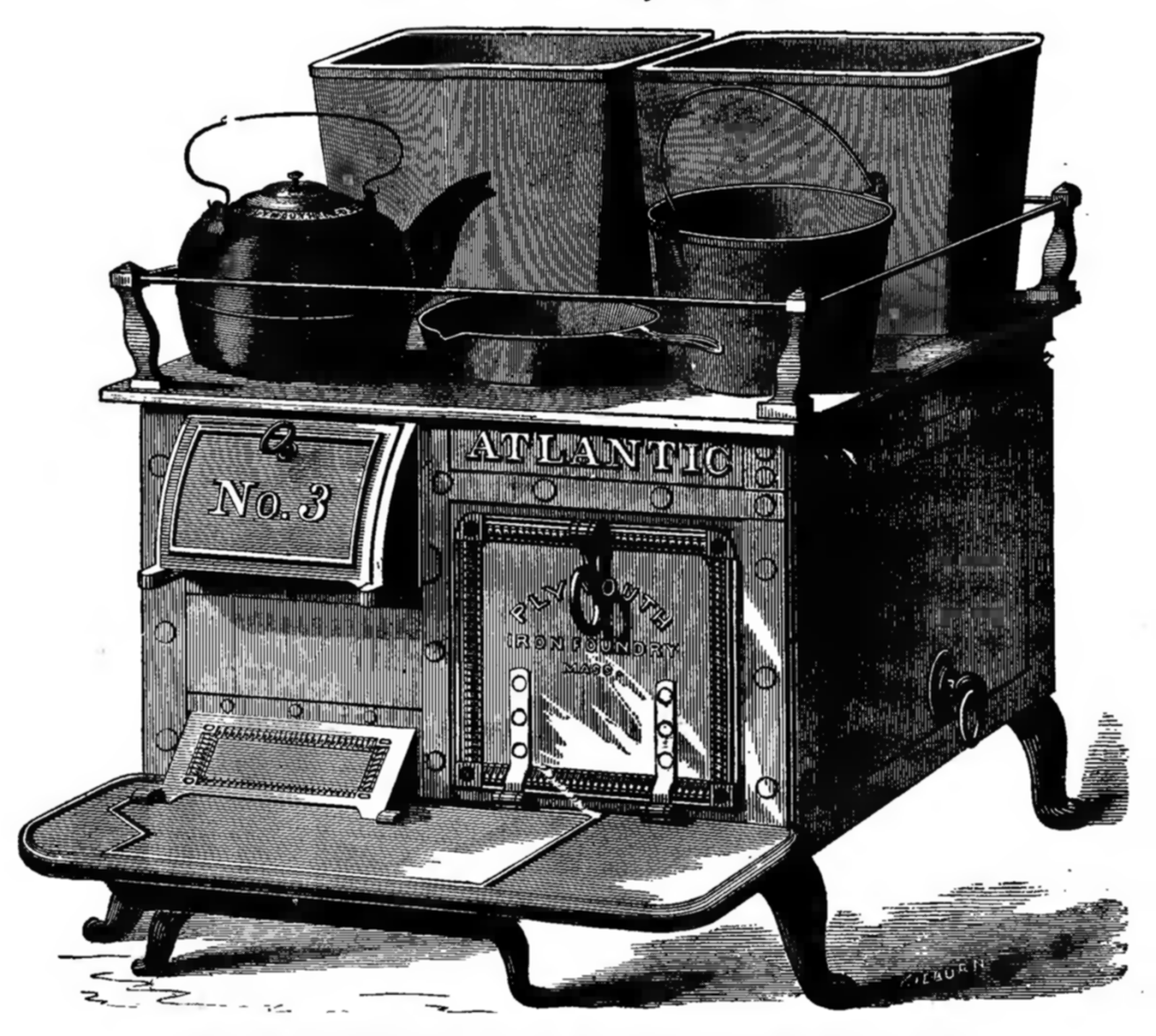 New York City continued to support several specialized caboose-makers through the late 1840s, one of them (Austin Packard & Co., or Packard & Starbuck) continuing to produce and advertise George Youle's cabooses for at least a decade after Youle himself retired from the business.

Posted by Howell Harris at 5:16 AM