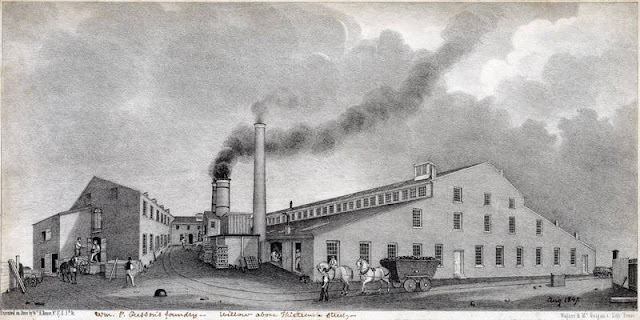 William Penn Cresson (b. 1814, retired from active business 1857), a member of a distinguished local Quaker family, was a hardware merchant before he decided to invest in a new foundry to manufacture within the city the goods that he traded.  This was built on about half a block in the Spring Garden manufacturing district of the city, bounded by Broad, Hamilton, Thirteenth, and Willow [later James, now Noble] Streets, with good railroad service rather than waterfront access.  The online version enables one to see men charging the cupola furnaces from the outside; piles of pig iron outside the boiler and steam engine house, with its tall chimney; a molding flask leaning against the wall; a molder pounding sand just inside the door; the modern, well-lit wide-span molding floor; and the horse tram bringing in fuel from the railroad running down the street nearby.  There seems to be one big difference from Warnick & Leibrandt's and Abbott & Lawrence's foundries (see below): the apparent lack of multi-storey warehouse space on site.

Thanks to an 1849 broadside, we can see, perhaps, part of the explanation: Cresson may have produced more hollow ware and fewer stoves than they did, or planned to.  Or perhaps, as a merchant, he already had warehouse space elsewhere?

I am not entirely sure why a hollow ware foundry required less warehouse space than a stove foundry, but perhaps it had to do with a steadier, less seasonal pattern of demand, so that products could be shipped through the year?  The city's other major hollow ware foundry suggests as much.

The Philadelphia branch of the Savery family businesses was established in 1838, and winning prizes for its hollow ware, by 1840.  Its foundry, on South Front Street between Reed and Dickinson in what was then an urban-edge neighborhood of South Philadephia, was in business by the end of that year.  It looks smaller than, but otherwise not dissimilar to, Cresson's.  Ware is stacked in the front yard, and going to market (or to the waterfront) by horse and cart.

To revert to Cresson, there is little apart from that broadside to describe his business and its products, except for an impressive spate of Design Patents that he took out as he established it in the stove market [see the Warnick & Leibrandt post for their similar efforts]:


These patents show us more than just Cresson's and his partners' artistic ability and their, and presumably their  customers', tastes.  They also, like Warnick & Leibrandt's and Abbott & Lawrence's, cast light on their business connections.  Who were Cresson's partners in design?  Jacob Beesley was already in business as a pattern maker in 1846.  The only Samuel Sailor in the city was described as a laborer, and David Stuart did not show up at all, unless perhaps as D.J., a clerk.  It was 1851, by which time Sailor began a long and successful career of design patenting as sole or first-named patentee, before he first appeared unambiguously in his own name, as a carver.  Beesley's independent patenting career began the following year, with the firm soon to be renamed Cresson, Stuart & Peterson among his clients.  Cresson had clearly launched two of his younger associates into the artisan enterprises they would follow after he laid down his drawing pen, and the other, Stuart, he took into partnership to enable him to withdraw from active business with his "competence" achieved by 1857, allowing him to devote the rest of his life to philanthropy and community service.  The other names on patents are those of their witnesses.  Cresson's most frequent witness -- on four patents in 1847-1848 -- was Richard Peterson, eventually his other new partner.

There are two later accounts of Stuart & Peterson's business as it stood before and after the Civil War, in both editions (1857, published 1859, and 1867) of Edwin Freedley's invaluable Philadelphia and Its Manufactures.


Three of the Foundries in Philadelphia are occupied almost exclusively in casting Hollow-ware and Hardware Goods, which are subsequently enameled or tinned. The establishment of one of these, that of Messrs. STUART & PETERSON, is probably more extensive than any other of the kind in the Union. In this manufacture great care is necessary in the selection and commixing of the different brands of Iron, in order to obtain castings of proper tenacity ; and after such are obtained, the inside surface of the ware must be made smooth and bright to protect the enamel. In England this is effected by turning the article in an ordinary foot-lathe, the tool being guided by hand ; but the inhalation of particles of Iron proved most destructive to the lives of the operatives. The firm above alluded to, employ for this purpose self-acting tools or lathes, the invention of their master-machinist; and so admirably do they conform to the irregularities of the surface to be turned, that they seem to be endowed with almost human  intelligence.

The products of this establishment embrace a great variety of
Culinary and Household articles -- Pots, Kettles, Stew-Pans, and other articles, from the smallest to the largest, as Caldrons, &c.

They deserved "very great credit for their successful efforts in competing with foreign manufactures."

Ten years later, Freedley repeated and extended his laudatory description of the company and its products:

The firm that have attained pre-eminent distinction in the manufacture of Tinned and Enamelled Hollow-ware is that of Stuart, Peterson & Co., on Noble street above Thirteenth. The foundry of this firm occupies an area of sixty thousand square feet, requiring to cover it an acre and a half of Slate Roofing. The moulding floor is in the form of a square, having a superficial area of twenty-two thousand five hundred square feet. Almost three hundred workmen are furnished employment constantly, and four thousand tons of American Iron are consumed annually.
This firm, by the adaptation of ingenious machinery, have so completely surpassed all foreign competitors in the production of Tinned and Enamelled Iron ware, that articles of their manufacture have a preference in all markets in the world. A detailed account of some of the processes and machines that are peculiar to this establishment will be found in Bishop's History of American  Manufactures, to which the curious reader is referred. [p. 401]

[They also] produce about five hundred Stoves a week, or twenty-seven thousand in a year. They make all kinds and styles of Stoves that are in demand, and employ six persons whose business is exclusively to originate and prepare new patterns and designs of Stoves and Heating Apparatus. [p. 458].

Posted by Howell Harris at 5:15 AM